Betula nigra, or river birch, is a fast-growing shade and ornamental tree. Indigenous to the eastern United States, from coastal New Hampshire west to Minnesota and south to eastern Texas and northern Florida, river birch prefers swampy areas, bottomlands and stream banks in its native range. It can grow as a single-stemmed specimen or as a multi-trunked clump. Pyramidal in form when young, it develops a rounded irregular crown when mature, topping out at 40 to 70 feet in height.

Although river birch prefers moist environments in the wild, it is tolerant of drier conditions when established and is relatively free of the pests and diseases that affect non-native Betula species. It also performs well in urban environments. It can exhibit chlorosis in alkaline soils, but this can be corrected by applications of chelated iron or other products to lower soil pH. It is an excellent choice for streambank and wetlands restoration projects. 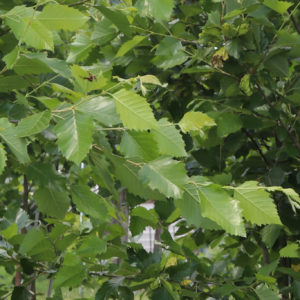 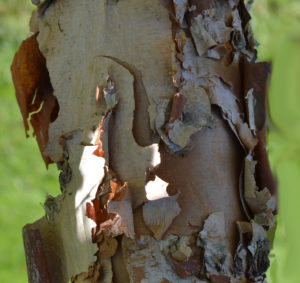 Betula nigra sap was used by Native Americans and early settlers as a sweetener, similar to maple sap. Because of this heavy sap flow, pruning should be avoided in the late winter and early spring.

White House Natives sells 3- and 5-stem Betula nigra in sizes from 8 ft to 14 ft and single-stem specimens from 2” to 4” caliper. We stake and prune our trees for even branching and limb them up from two to four feet depending on size to show off their exfoliating bark. Many good cultivars are sold by other nurseries in the trade, but WHN focuses on growing the straight species.