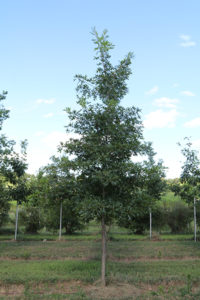 Quercus coccinea (scarlet oak) is another staple of the woodlands of eastern North America.  Often confused with red oak (Q. rubra), black oak (Q. velutina) and especially the closely-related pin oak (Q. palustris), it can be distinguished by its bristle-tipped seven-lobed leaves with broad ‘C’-shaped sinuses, compared to the deeper, ‘U’-shaped sinuses of Q. palustris.  Like the southern red oak (Q. falcata), which we recently featured, it has become more popular in the landscape trade in recent years due to its tolerance of urban conditions.

Quercus coccinea coloring up in mid-autumn.

Growing as tall as 150 feet in its native range—which spans from southern Maine west to Wisconsin and south through Missouri to northern Louisiana, Alabama and Georgia—scarlet oak typically matures at 60-75 feet tall in the landscape with an irregular, rounded crown.  Unlike some of its oak brethren, scarlet oak tends to cast a broken rather than dense shade.  The shiny, dark-green leaves are 5” to 7” long and around 4” wide and color late in the autumn, with a reliable scarlet color that slowly fades to claret then brown as winter progresses.  Acorns are usually around ¾” long, half-covered in a scaly, bowl-like cup; light in most years but with a heavy crop every third or fourth year.  The thin, brownish-grey bark develops broad, widely-spaced ridges with age.

In the wild, scarlet oak is a climax forest species, preferring upland sites with good drainage and often thriving on poorer, rocky, gravelly or sandy slopes.  In the landscape, it is adaptable to a wide variety of conditions, disliking only alkaline soils.  Once established, it exhibits good drought tolerance and is far less prone to chlorosis (leaf yellowing) than its sister species pin oak.  It typically grows quickly when young and usually begins to bear acorns when less than twenty years old.  Scarlet oak makes an ideal shade tree for larger spaces due to its dappled shade which allows a variety of shade-loving shrubs to thrive under its canopy while still receiving filtered sunlight. 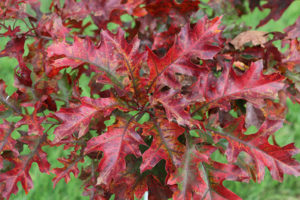 Wood from the scarlet oak is often sold as ‘red oak’ in lumber yards.  While not as dense and durable as white oak (Q. alba), the reddish tone and coarse grain of the seasoned wood is valued for cabinetry, furniture and interior detail work.  Like many oaks, dried acorns were leached in water then ground for flour by Native Americans; the acorns are also an important food source for many large native songbirds, grouse, turkey and of course, white-tailed deer and squirrels.

White House Natives supplies Quercus coccinea in a range of sizes including 2”, 2½” and 3” caliper.  As with all our trees, we prune regularly and rigorously, so the trees you receive are ready to make an instant impact on your next project.