For December, we’re featuring one of our finest native species for winter interest—the common winterberry (Ilex verticillata).  Native to most of the northeastern third of the United States; from Wisconsin to Maine and south to the Carolinas, Kentucky, and Tennessee, Ilex verticillata is a suckering large multi-stemmed shrub or small tree that finds a happy home in wet areas or in the shrub border.  It typically grows 6 to 15 ft tall in its native environment with a spread equal to its height.  In the wild, it is typically found in stream bottoms and in wetlands, but tolerates drier conditions in the garden with supplemental watering during long dry spells. 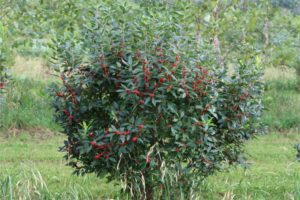 Ilex verticillata has small dark-green elliptical leaves, typically 2-3” long.  These leaves usually turn bright golden-yellow in autumn.  Inconspicuous yellow-green flowers appear in late spring.  Properly pollinated, these flowers give rise to numerous ¼” berry-like fruits that closely hug the stems through the winter.  Like most hollies, Ilex verticillata plants are of separate sexes, so a nearby male plant is necessary for fruit set on the female.  But unlike typical hollies, winterberry is deciduous, which only helps to further enhance the display of bright red fruits after leaf fall.  These fruits are a favorite of native songbirds.  The smooth, grey bark provides a nice backdrop to the fruit display.  Tea from the colorful fruits was used as a fever remedy by Native Americans, but can cause nausea and low blood pressure if consumed raw. 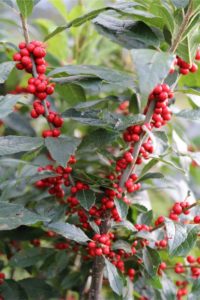 In the landscape, winterberry is ideal for swales and drainage areas and works well in the shrub border where it serves as an ideal background to colorful annuals and perennials before coming into its own glory in autumn and early winter.  It prefers full sun or very light shade at the edge of a woodland.   It is virtually pest-free aside from occasional leafspot or leaf mildew during prolonged rainy spells.  Like most water-loving plants, it prefers a neutral to acidic soil.  It is relatively slow-growing and requires only occasional pruning in late winter to maintain shape.

White House Natives supplies Ilex verticillata in a range of sizes including 4 ft, 5 ft, 6 ft, and 7 ft.  If you’re looking for a standout showy shrub for the winter garden, you can do no better!