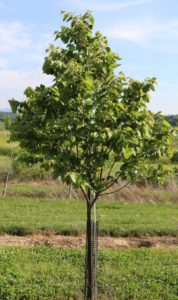 Tilia americana, the basswood or American linden, is a medium to large deciduous tree, often growing to 80 to 100 ft tall in the wild.  It is native to east-central North America, from southern Manitoba and Minnesota south to Missouri, the eastward to the Atlantic Piedmont and northward to the Canadian Maritimes.  In its native range, basswood can be found in a variety of habitats, from stream valleys to rocky uplands, but it is most happy in fertile, moist lowlands in slightly alkaline soil.   Pyramidal in youth, given space and room to grow, it typically develops an upright oval crown surrounding a tall single leader.  Unlike many native trees, the American linden tends to retain lower branches as it matures, with those lower branches sweeping towards the ground then upward at the canopy’s edge. Also unlike many natives, it has a good tolerance for partial shade. 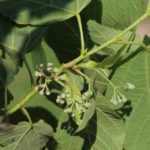 In the landscape, T. americana typically tops out at 40-60 feet with a spread of 35-45 feet.  It features 4-8” long-deep green heart-shaped leaves that typically turn a pale yellow in autumn.   Late spring produces an abundance of 2-3” clusters of tiny pale-yellow flowers.   These flowers are extremely fragrant and a favorite of bees, so much that the tree itself can appear to buzz from the mass of bees feeding on the flower nectar.  The resultant linden honey is valued for its unique flavor. The flowers are followed by small grey nutlets which persist into early winter and are a favorite food of songbirds and squirrels. The bark is greenish-grey in color on young stems, turning medium-grey and becoming ridged and furrowed with age.  It is a good choice in a larger landscape, especially when given space for its roots to spread.  It is especially valuable for shade, as the leaf density of T. americana typically produces some of the densest shade of any native tree.  Adequate root space helps basswood to resist leaf scorch, which can affect exposed trees in hot, windy weather.  Tight planting spaces between sidewalk and street can often stress the tree, making it more susceptible to leaf scorch.   Aside from leaf scorch under stress, American linden is fairly resistant to pests; the leaves are a favored food of the Japanese beetle (Popillia japonica), however, which can be unsightly during times of high beetle populations., 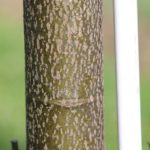 The wood of T. americana is pale brown; often almost white and occasionally tinged with faint reddish streaks. It is close-grained yet light; these characteristics made it useful for the manufacture of boxes and baskets and also for guitar-making.   It is also a favorite of woodcarvers due to its resistance to splitting.  The inner bark of basswood is stringy and fibrous and was used by Native Americans and early European settlers for rope-making.  Tea made from the leaves was also used as an anti-inflammatory and a mild sedative. 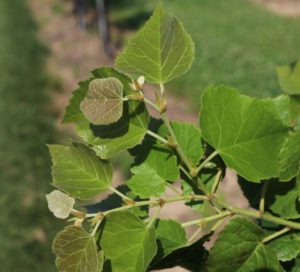 White House Natives supplies Tilia americana in 2”and 2½” caliper.   If you need a large tree that produces great shade, it is an excellent choice!