The walnuts are hanging green heavy on their branches in the Shenandoah Valley, ready to drop with a waft of wind. Through the mist of foggy mornings, hackberry leaves are turning yellow, about the same shade as paw-paw foliage, and are beginning to welcome the change of seasons as autumn creeps through the forest. It is early fall and the woods are full of activity as squirrels scoot around, gathering acorns and hiding their caches, perhaps to be revisited later in the winter, possibly forgotten and left to lucky marauders.

Persimmons (Diospyros virginiana), one of the most prized of the late fall fruits, are steadily ripening on their branches, a treat for almost all forest animals including opossums, raccoons, skunks, squirrels, deer, fox and birds. Many small insects enjoy the bounty as they make quick work of the soft sweet fruit when it falls to the ground in early winter. 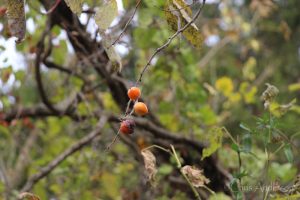 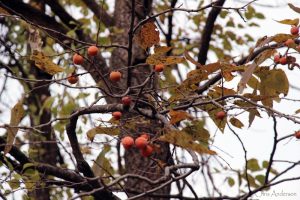 In forestry circles, there are a few jokes that are guaranteed to entertain all but the one who bears the brunt of the amusement: such is the case with convincing an unsuspecting victim to bite into an unripe persimmon. In a matter of seconds, it feels like every ounce of moisture is vacuumed from one’s mouth, an uncomfortable sensation that persists for much longer than it seems like it should. Care should be taken when eating persimmons to make sure they are sufficiently soft and ripe, generally late fall to early winter.

The fruit pulp can be made into bread, pies, pudding, molasses, beer and vinegar. Called ‘nature’s sugarplums’ by Euell Gibbons[1], he recommends harvesting ripe fruits by spreading a tarp under the tree and shaking the branches. The name ‘persimmon’ is derived from putchamin, pasiminan, or pessamin, from Powhatan, an Algonquian language of the eastern United States[2]. The Latin name Diospyros comes from the ancient Greek word for “divine” and “grain”.

Persimmons grow across the entire eastern half of the United States and can thrive on rocky slopes, river bottoms and adapt to about every woodland situation in between. They are hardy, often enjoying edge habitats and are medium in stature, growing to heights of 40 to 60 feet with diameters of one to two feet.

The genus Diospyros has around 450 species: 200 or so in lowland Malaysia; quite a few in tropical Africa; somewhat fewer in Latin America; some in Australia and India; and a few outliers in the United States, the Mediterranean, and Japan.[3]

Belonging to the ebony family (Ebenaceae), persimmon wood is very hard, close grained and dark brown to black with the sapwood and heartwood a lighter shade. The wood is made into golf club heads, weaving spindles and shuttles as it can withstand force. It makes for strikingly beautiful musical instruments, boxes or small pieces of furniture.

The City of Suffolk boasts the state champion persimmon with a height of 85 feet and circumference of 152 inches.  Champion trees are ranked by height, canopy spread and trunk circumference on a point system, and, at 254 points, this fine specimen almost meets the measurements of the national champion in Ohio which comes in at 256 points.

One of the easiest ways to recognize the persimmon tree is by its distinctive chunky bark which resembles charcoal briquettes. Deeply fissured, the bark is easy to spot as no other bark has the same type of deep box-like indentations (though dogwood are similar, they are not as deeply carved as persimmon bark). In a mature forest, a whole world of fascination can be discovered by examining this type of tree bark with a magnifying glass. A subtle web of life consisting of lichens, caterpillars, resting moths, beetles and other tiny beings often make their homes or seek temporary refuge in the protection of such patterned bark. Cottonwood, dogwood and white oak are also good candidates for such detailed examinations.

In the landscape, persimmon trees can be multi-trunked or pruned into a single-trunk leader. The branches droop gracefully and with the oblong, ovate leaves, have a slightly tropical appearance. In autumn, the leaves turn shades of yellow but can also range into oranges and reds. They leaf out late in the spring, and flower after the leaves have grown to a moderate size.

They are dioecious so, if being grown for their fruit, a male and a female should be planted in proximity to one another.

Once established, they tend to grow without significant threat from pests or diseases, bear fruit in seven to eight years, grow quickly (and colonize from their root system) and can grow in full sun to part shade. The persimmon is a nice native tree and a good choice as a specimen or for soil stabilization purposes.