The tulip or yellow poplar (Liriodendron tulipifera) is one of the largest and most valuable hardwood trees in the United States. Its trunk grows straight and uniformly up to the first branches and develops a broad, columnar shape. Yellow poplar stands are also popular with mushroom hunters as the prized morel mushroom grows best under these trees.[1]

The tulip tree is a member of the magnolia family and there are only two species, one native to the eastern US and the other native to central China. It has numerous unique characteristics from large yellow flowers with orange highlights to odd shaped leaves.

The Greek genus Liriodendron means lily tree and the specific epithet, tulipifera means tulip-bearing. Linnaeus, when he named this tree, was obviously emphasizing the tulip-shaped leaves and the large summer blossoms, and maybe even the flowerlike design of the winter seeds.[2]

When planting it in the landscape, give it plenty of room as it can grow up to 200 feet tall and has an average life span of 250 years (maximum of about 450 years). In the wild, they favor rich woods and grow well with other mixed deciduous trees.

The American tulip tree yields a creamy timber, with streaks of olive green, black, pinkish brown or even steely blue from growing in mineral soils; it is much valued for carving as well as for doors and such like. As a timber tree, Liriodendron is sometimes known as yellow poplar and is sold as American whitewood.[3] 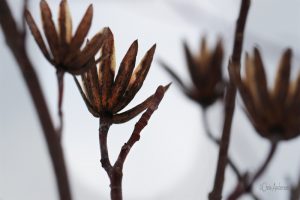 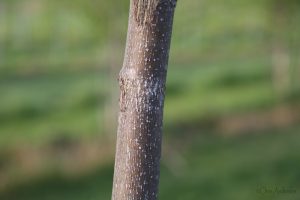 Due to its unique beauty and value as a timber tree the tulip tree is the state tree of Indiana, Kentucky and Tennessee.

However, despite its aesthetic appeal, the tulip tree is not ranked very high for wildlife value. According to Douglas Tallamy, ‘Tulip tree is one tree species that has done particularly well in the absence of chestnut, and it is now the dominant species in many forests in the East. Unfortunately, it is one of the least productive forest species in terms of its ability to support wildlife – insects and vertebrates alike.[4] Tallamy includes poison ivy and ferns in the species that few caterpillars can eat while oaks, willows, and cherries host over 1400 species between them (Tallamy, 145). 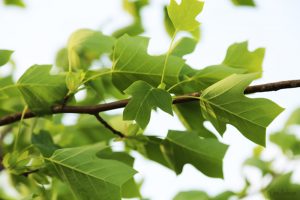 Distinctive leaves of the Tulip Poplar 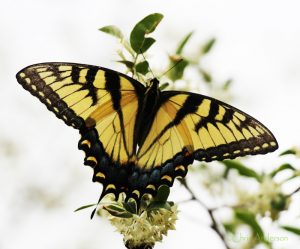 Tulip Trees serve as a host for Tiger Swallowtail caterpillars

However, tulip poplars have many other ecological values: deep and extensive roots help hold soil in place; its fast-growing nature provides a valuable choice for quick establishment in the landscape, a wide canopy provides nesting sites for birds and the leaf litter falls to the forest floor enriching the soil.

It may not support a large list of caterpillars, but it is favored by one of the prettiest and most showy: the larvae of the tiger swallowtail (Papilio glaucus) eat the leaves (in addition to black cherry but they will also consume willow, ash, basswood and birch as well. (Tallamy, 118).

The seeds provide some small value to wildlife as they persist on the tree through winter. Another good way to recognize the winter tree is by its flattened end buds. They are shaped like a duck’s bill and the twig adjacent to them tastes at first like sassafras, then seems slightly bitter. (Stokes, 141).

Shenandoah National Park protects the stand of tulip poplars listed under old trees in Greene County: In  Pocosin Hollow, a five acre plot of old growth forest exists, somehow escaping the saws which cleared much of the mountain land. Tulip poplars are the dominant tree in this special area and one tree is nearly 150 years old with a diameter of almost six feet. As writer Nancy Hugo-Ross notes, ‘standing among them is like standing in a cathedral with massive columns’[5]