The easiest way to describe the American beech (Fagus grandifolia) to those who may not be familiar with it is ‘it’s the one with the smooth silver bark on which people tend to carve their initials’. The bark is extremely delicate and is easily injured, creating permanent scarring from which the tree doesn’t recover. Such marks are not only permanent on the trunk but they will be around a long time as the tree is very long lived, growing to ages of 300-400 years old. Among American broadleaves only the white oak and sugar maple are said to live longer.[1]

Mature trees can reach heights of 50-70 feet with impressive canopy spreads of up to 40 feet, providing excellent shade and serving as an appealing specimen tree. In the fall, they turn bronze to yellow and their leaf litter feeds the soil underneath, creating a rich microbiome which supports the tree’s health and that of its forest or landscape neighbors.

Typically, beech are slow growers which makes them an excellent choice for legacy trees, those special trees planted in memory of a loved one or to mark an important event.

Beech thrive on a range of soil types from basic to acidic but are a little finicky in their water requirements: They require well-drained locations as their roots do not do well in water-logged situations but are also drought sensitive so need adequate, regular water.

They are also easy to recognize in the winter as they tend to hold on to their brown leaves, providing a memory of the previous season’s growth and the promise of a return of green foliage in the spring. They are one of the few species that can germinate and do well in the shade of a mature forest canopy.

Unfortunately, like many of our native tree species, the beech is under attack: Beech bark disease is a fungal infection  introduced by a scale insect and, under severe conditions, can kill the tree. Also, the beech blight aphid (Grylloprociphilus imbricator) is a common pest of American beech trees. However, the benefit of beech to wildlife is outstanding: Like basswood, the American beech is the only member of its genus in North America, yet it supports over 100 species of Lepidoptera. On a per-species basis, this makes beech more productive in its support of wildlife than even the number-one ranked oaks.[2]

The beech often seen in landscaping is the European beech (Fagus sylvatica) and there are many cultivars such as the weeping and tri-color beech, however, in North America, the native beech more reliably supports native insects, birds and butterflies in Virginia and the mid-Atlantic. 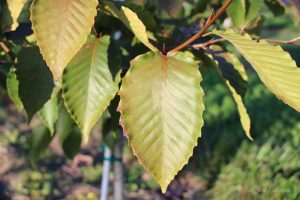