A major and rapid change is occurring in forests of the Eastern U.S. as the emerald ash borer kills one of the most prevalent native hardwood trees.

The larvae of Agrilus plenipennis feeds inside the bark of green and white ash killing the tree and, unfortunately, there are no natural predators to keep their population in check. Thousands of trees are already dead or in decline.  If the trend continues, in a matter of a few years, most ash trees will be gone.

This loss is of particular concern for watershed health as ash trees tend to thrive next to rivers and streams across Virginia and the mid-Atlantic.

Trees shade water, lowering temperatures and creating a healthy habitat for native species. They help keep soil in place and decrease erosion and their leaves, twigs, flowers and fruit help support macroinvertebrates. Too, the loss of ash trees opens the canopy, providing an opportunity for non-native invasive species to take hold or expand their coverage. 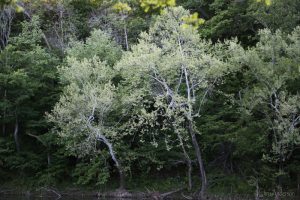 Spring foliage of sycamore next to the Shenandoah River

Fortunately, there is a native tree that thrives in the same habitat as ash: sycamore (Platanus occidentalis) can grow up to 145 tall and 14 feet wide; their massive girth makes them the largest of Eastern hardwoods and, according to the Virginia Department of Forestry, the largest deciduous tree in North America. Their large leaves (approximately six inches at maturity) make them ideal for providing shade along water ways or in the landscape. The canopy of mature trees can reach up to 70 feet.

Sycamore is one of the easiest trees to identify in the winter with its bold white limbs and trunk. Mature trees naturally shed bark in interesting patterns in shades of cream, tan and light gray. In winter, their fine structure is highlighted in the absence of leaves, appearing like tall, strong bones of the forest. 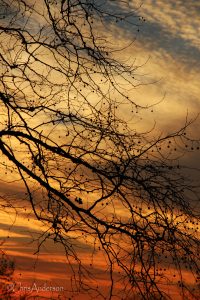 Sycamores are able to handle air pollution better than many trees making them a nice selection in urban areas. Due to their considerable size at maturity, allow them plenty of space to grow, avoiding placing them next to structures, utility lines or pavement which can be damaged by their roots. They are not drought tolerant so should be planted in areas where they get plenty of regular water such as adjacent to streams or ponds. Their shade is welcome on hot summer days but consideration should be given to the copious amount of leaves they shed in the fall if a manicured appearance is desired and the leaves require raking.  They can live 500-600 years so make good commemorative trees.

Sycamore is prone to anthracnose which can cause some of the leaves to shrivel and turn brown in the spring. Most trees put out new leaves to replace those lost and the fungus is not fatal or even seriously impairs the health of the tree. It can create sprouting branch clusters but these don’t hurt the tree.

The benefits to wildlife are many: birds eat the seeds, particularly the diminutive winter residents like goldfinch, dark-eyed juncos, finch and chickadees. Mammals dine on them as well – squirrels, muskrat and beaver. Many an owl has likely passed their day resting in the hollows of sycamore trunks and their twisting roots above ground provide comfortable shelter for hibernating bears. The leaves are also a host to the lovely Eastern tiger swallowtail.

Being a native tree, among other uses, Native Americans utilized the wood for cooking utensils and to make dugout canoes due to its strong but light characteristics. A tea can be made from the sap, though it reportedly takes a lot of sap to yield sufficient amounts to taste. The seed ball fluff and peeling bark make for good fire starters, particularly useful in wet conditions.

The American sycamore resembles its relative, the London plane tree (Platanus x acerifolia) which is a hybrid between Platanus occidentalis  and Platanus orientalis.

The name sycamore comes from Greek for “fig mulberry” and occidentalis means “of the West” to distinguish it from its European relatives.

In conclusion, as we sadly witness the disappearance of ash trees from the landscape, at least there is one nice alternative which may be planted in its stead that is both beautiful and valuable to wildlife – both terrestrial and aquatic.